In the short video you can find out about the first results of Aquatic Warbler translocation.

In 2018-2019 the first ever Aquatic Warbler translocation was implemented. In two years, 100 chicks have been relocated from the biggest world population of Aquatic Warblers in Belarus – Zvaniec fenmire – to a small and and decreasing population in Žuvintas, Lithuania. This tested a nature conservation method that has never been used with the species before – translocation.

This method works just like a blood donation: a small portion of birds are taken from a healthy, viable population in order to save another – sick and endangered – population. In this way we could revie these weak populations or even save ones that are completely gone. This method is radical and risky, but one of the few options left to help this species. 95% of Aquatic Warblers disappeared during the last century and world population is still decreasing, especially at the edges of the range. Here populations cannot recover naturally even if habitats are restored to excellent condition.

Naturalists managed to raise and release 99 out 100 juveniles. Already after the first year 11 out of 49 released birds came back to Žuvintas after wintering in Africa – that is 22 % of all birds. This indicator even exceeded the natural return rate of the first-year juveniles. In the second year 7 birds that were translocated here in the previous year were found in Žuvintas and 3 more that were transferred here 2 years ago. After translocation Aquatic Warbler populations in Žuvintas jumped to record highs. In 2020, the largest historical population of these rare birds was recorded. It shows that the method works.

More about this unique expedition: About the second year experience in our video blog series: https://www.youtube.com/watch?v=y3gcieVioSk&list=PLh66DQlmkQsZbZcYl6D22s5XlxmXWB1Tu 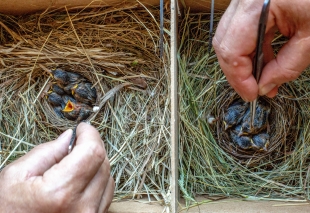