Under favourable conditions, on February 7th in the world’s largest habitat of Aquatic warbler – Zvanets fen mire – a controlled burning took place. This is one of the measures to improve conditions of these habitats. There are about 3000 singing males in the Zvanets fen mire.

The burning was carried out in an area of about 500 ha. This is equivalent to 690 football fields. During the controlled burning, there were some areas covered with snow and the spaces between the hummocks were covered with ice, because of this, dry vegetation was not burning very actively. Due to this, only the upper part of the grass vegetation and dry reed stalks were burned. The carried out burning will ensure the absence of destructive fires during the dry spring period, will significantly increase the productivity of vegetation and improve conditions for nesting for Aquatic Warblers and other bird species.

NATURE MANAGEMENT IN PEATLANDS – MOWING, BURNING AND OTHER MEASURES

Overgrowing of open sedge marshes with reeds and shrubs is one of the reasons of Aquatic Warbler population decline. This problem is relevant for most types of wetlands in Europe and North America. The best method of dealing with reeds and shrubs is regular mowing during the growing season. Bushes and reeds stop growing after mowing the plot for several years. This is due to the peculiarities of reed biology – they have powerful rhizome, which stores spare nutrients during the growing season. From this rhizome new shoots of reed grow the next year. If the reed is mowed during the growth period (July – September), the the inflow of nutrients to the rhizomes will stop. In addition, a new shoot will begin to grow and the growth of it will require additional nutrients from the rhizome. After a few year of mowing, the rhizome loses all it‘s reserves and dies. In Europe, the main method of fighting reeds is regular mowing, which is supported by making special payments to farmers for maintenance of important habitats for biodiversity. In North America the methods are more radical – they destroy reeds with glyphosates (such as roundup).

In the Zvanets fen mire, the areas overgrown with reeds occupy large areas (more than 3000 ha). It would be very expensive to mow such big areas twice a year. Since 2014, with the help of international technical assistance projects (EU – UNDP climate and the UNDP – GEF wetlands projects), mowing and the use of marsh vegetation began in Zvanets, but they cover small areas so far. Therefore, in order to improve the nesting conditions of the Aquatic Warbler and other rare species in the Zvanets swamp, the prescribed burning is being done. This method is not expensive and can significantly improve the nesting conditions. The reed in the marsh grows quite slowly and before the reed rises above the sedge, Aquatic Warblers manages to hatch the first chicks. But by the second egg laying period (beginning of July) the reed grows more than 150 cm, creating solid thickets and bird leave such areas. So, after the burning, at least the welfare of the first clutch is taken care of in a large area of this territory. It should be noted that controlled burning can be carried out only in winter, when the ground and the lower part of vegetation are covered by snow and ice and the fire does not destroy the roots of plants and most of the insects. In addition, after the winter burning, the spring fires, which occur often in the Zvanets fen mire (causing great damage to the entire ecosystem), will no longer be possible.

Controlled burning in the Zvanets fen mire was carried out in the frames of UNDP – GEF wetlands and EU LIFE MagniDucatusAcrola projects. The burning was carried out by the employees of the Zvanets Reserve, in the presence of the staff of the Scientific-Practical Center of Natural Resources of the Belarusian National Academy of Sciences. 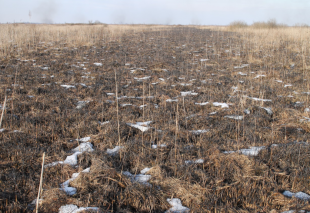 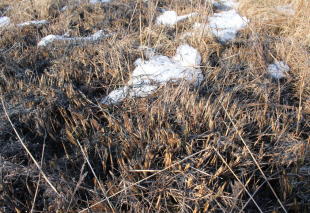 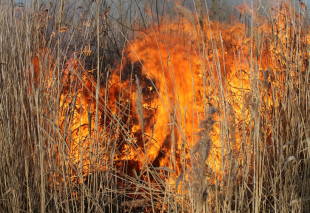