In the city of Alytus, in Lithuania, the local art school got the name of Aquatic warbler. The new sign “Aquatic Warbler Art School” is already hanged on the wall. Although, it is a symbolical gesture, the director of the Art school Redas Dirzys says, thats this action has a deep meaning.

“Adolfas-Ramanauskas Vanagas Gymnasium is across the street under the name of famous fighter for resistance of Lithuania. What makes the Aquatic Warbler worse? I can formulate the question differently – are other living forms less important than a man and why? I think that other living beings are even better than humans and we can learn a lot from them, ”- says Redas Diržys, the director of Alytus Art School.

Žymantas Morkvėnas, a project manager for Aquatic Warbler conservation project, who gave this symbolic name for the school says: “It all started when Redas Diržys visited us in the Žuvintas Biosphere Reserve in the summer, where we raised 50 aquatic warblers translocated from Belarus. He was inspired by our work, we talked a lot about conservation, the public attitude towards it, and somehow we ended up talking about symbolism. The idea to rename the school into the Aquatic Warbler Art school came up. That’s what we took care of. ”

By the Aquatic Warbler name given to the School of Arts it is expected to draw the attention of the public to the values of nature and to stimulate thinking about our  impact on nature.

Alytus city is situated near Zuvintas Biosphere Reserve, one of the Aquatic warbler habitats in Lithuania. This summer, the first ever translocation of Aquatic Warbler has been implemented in Zuvintas successfully. 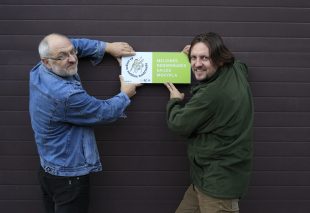