The aquatic warbler is a tiny bird that needs humans’ help to survive. The drastic decline of this globally threatened species has led conservationists to implement wide-scale habitat translocation initiatives over recent decades. Together, the Baltic Environmental Forum Lithuania and their partners in the Scientific-Practical Center of Natural Resources of the Belarusian National Academy of Sciences, tested a new method which might become crucial for the protection of this species – conservation translocation. And it was a great success.

Conservation translocation activities were implemented in 2018 and 2019 and subsequently monitored. This is a world-first attempt at translocation of the aquatic warbler and the second attempt globally to translocate a long-distance migrant passerine. Translocation of long-distance migrant passerines is especially challenging due to their high mortality rates over the winter migration and the high dispersal probability of young birds. These challenges called for the development of a complex and delicate design for the pilot conservation method, which was based on the IUCN guidelines for translocations and available best practices with other species. 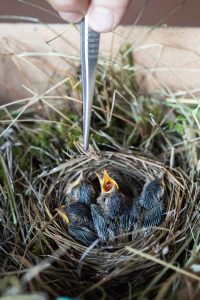 Zvanets fen mire (Belarus), home to the largest population of aquatic warblers, was chosen as the source area for the translocation, while the release site selected was a compact fen mire complex in the Zuvintas biosphere reserve in Lithuania.

Intensive work during the conservation translocation involved a large team of almost 60 committed conservationists and volunteers from Lithuania and Belarus acquiring unprecedented experience and creating a solid know-how basis for future conservation initiatives.

A new hope for a highly specialized peatland songbird

The success of this translocation conservation method gives a new hope for this umbrella species that lives in large open peatlands. This highly specialized bird is declining due to massive habitat loss and increasing fragmentation causing population isolation and decline.

In such circumstances, even successfully restored habitats might not result in the independent return of this species, as the closest viable populations might be still too far away. In such circumstances, newly tested conservation translocation can be an effective complement to fen mire restoration efforts. As recent experience proves, translocations can prompt the return of aquatic warblers to their newly restored home. Successfully restored populations can then further occupy other nearby habitats. Therefore, the Baltic Environmental Forum has begun developing a stepping stone habitat network for Lithuania and Belarus, which directs future conservation and peatland restoration strategy in the region. 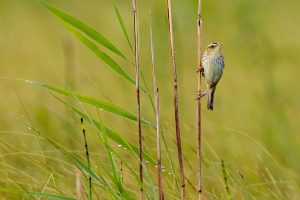 “It sets an important cornerstone of species conservation strategy as an effective tool to recover populations in abandoned habitats within its range. Combined with habitat restoration, isolated populations can be easier reconnected by establishing new populations in the functioning network of stepping stone habitats. This is a strategic aproach and further translocations are planned to be applied in the restored habitats” explains Zymantas Morkvenas, director of the Baltic Environmental Forum and leader of the translocation activities.

Dianna Kopansky, Global Peatlands Coordinator from UNEP stresses how peatlands protection and restoration is essential for biodiversity to thrive: “People often just think of peatlands as carbon reservoirs, but they are so much more than that! They are important   for our climate, but also for the biodiversity they house. The aquatic warbler is the rarest passerine bird in mainland Europe and destroying peatlands means destroying its habitat.

Working together to preserve and restore degraded peatlands avoids the extinction of this threatened species.”

The newly introduced conservation translocation serves to complement traditional methods of species conservation, namely habitat restoration/maintenance, and increase their cost-effectiveness. Left alone, newly restored habitats may require a number of years until they are colonized by aquatic warblers, while some restored areas may not be colonized at all due to the isolation of warbler populations. Conservation translocation opens up the possibility of recolonising newly restored area and achieving the desired conservation effect comparatively quickly. Establishing new breeding populations helps to reduce fragmentation and foster connectivity, which is an essential precondition for the durability and effectiveness of overall species conservation efforts.

In parallel to the conservation translocation activities while implementing project LIFE MagniDucatusAcrola (LIFE15 NAT/LT/001024), the Baltic Environmental Forum Lithuania and Scientific-Practical Center of Natural Resources of the Belarusian National Academy of Sciences are also focusing on conducting peatland rewetting activities over a large area of project territory (about 17,000 ha).

You can learn more about this pioneer conservation translocation method in a short movie: https://www.youtube.com/watch?v=tog4eyfCAek or check out video diary filmed during translocation: https://meldine.lt/en/tranlocation-video-diary/

This release is part of the Global Peat Press Project (GP3) campaign, bringing together international partners to highlight the importance of peatlands as vulnerable but valuable ecosystems. It is a coordinated media campaign from the UNEP’s Global Peatlands Initiative (GPI) and the North Pennines AONB Partnership to promote the UN Decade on Ecosystem Restoration (2021-2030) and toward the UNFCCC COP 26 through the work of organizations throughout Europe and beyond.

A relay of stories from peatland projects worldwide, GP3 started with the UK, as the host of COP26, which took place in Glasgow, Scotland. The release has already featured: 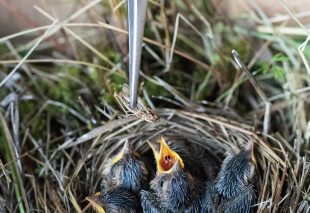